Detecting Laced Weed and It's Symptoms with Pictures

Learning if you have laced weed is essential if you don’t want to end up smoking it.  Laced weed is rare because it takes away from profits and makes enemies.  It’s more likely that you are smoking moldy weed.

What is laced weed?

Laced weed is most commonly laced with coke, PCP, meth, and heroin. If weed is laced, it’s usually intended to be consumed by the person who did the lacing. However, dealers may sell laced weed at a higher price as a “wet” or an “amp” joint.

Your cannabis should look green and smell pungent. When it’s laced with another drug it can smell like harsh chemicals and can have a burning sensation when you inhale. If you shake a bud, not many crystals should fall off, a little is alright as those are probably trichomes. Trichomes are brown to clear in color. If you see blue or white crystals, the weed is probably laced. In order to get a close look of the trichomes, I like to use a 420 scope.

Because of cocaine’s availability, coke laced weed is probably the most popular form of laced weed. Coke is the white powdered form of cocaine and is normally smoked, snorted, or ingested. The texture is close to powdered sugar.

Cocaine smells like ether, gasoline, or the chemical that used to extract the freebase from the mash. This smell can sometimes even be mistaken as cannabis.

Imagine putting a Tylenol in your mouth and chewing it. This is close to what cocaine tastes like. It’s a little metallic, bitter, and chemical like taste. However, when smoking or ingesting weed laced with coke, the numbness it causes may make it difficult to taste.

Smoking cocaine laced weed is dangerous because it puts stress on your lungs, heart, and brain. Your muscles tense and your heart will beat faster from constricted blood vessels which can result in a heart attack, stroke or even cardiac arrest.

Crushed glass can be added to weed to make it weigh more, make it look like there are more trichomes than there actually are. Glass laced weed may also be the result of an accident.

A good way to test if your weed is laced with glass is to use a CD. Weed, on its own, will not scratch a CD easily. All you have to do is to gently rub a bud on a CD and if it gets scratched your weed is probably laced. Although, if your weed is dry it may still scratch CD.

Phencyclidine, aka PCP or angel dust, can be found in the form of white powder or crystals, capsules, tablets, or liquid. Developed in the 1950s as an intravenous anesthetic, PCP was soon discontinued due to its side effects. PCP has a distinctive bitter chemical taste and can range in color from tan to brown. 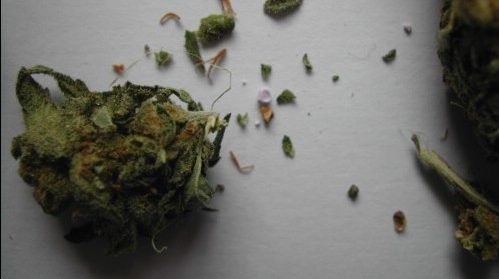 In small amounts, weed laced with PCP can make you feel detached, distant, and estranged from your surroundings. Friends may notice you staring blankly and blinking often. Smoking PCP laced weed can also cause:

Smoking weed laced with LSD or acid in a pipe won’t cause you start hallucinating or result in any other effects. This is because it’s destroyed by the heat of the lighter. However, if you buy pre-rolled joints or blunts the tip may have LSD or acid on it and when you put it in your mouth it will be absorbed into your system.

Unfortunately, weed laced with heroin isn’t as uncommon as the rest. Heroin can be a white/brown powder or a black sticky substance known as black tar heroin. It tastes bitter and smells vinegar or rubber. 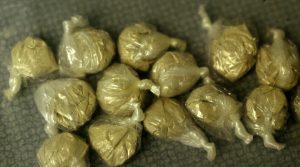 Embalming fluid contains formaldehyde which is known to cause cancer. Weed is laced with embalming fluid in order to make it seem stronger than it actually is and is very dangerous. By itself, formaldehyde is colorless and smells somewhat like pickles.

A dealer may coat your buds in powdered laundry detergent in order to make it look like there’s a lot of crystals and to make it smell fresh.

If you smoke weed laced with laundry detergent you’ll taste the chemicals in the soap along with the fragrance.

Testing for laundry detergent is very easy. First, find a small watertight container and put some water in it along with some of the weed in question. Next, simply shake the container and look for suds of soap.

Now that you know how to detect laced weed, please spread this knowledge and share this guide and you just might save a life.