Air fresheners are usually the first thing people try and can be effective if you rarely smoke in your car. However, air fresheners don’t do a good job of removing the smell and are best used in combination with an air neutralizer. 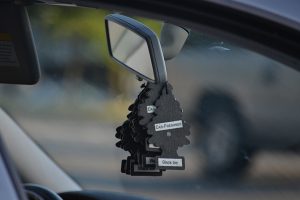 I like to buy Little Trees three pack of car fresheners. When you leave them in the car with the windows rolled up for a few days, especially on a hot day, you can’t smell anything but these air fresheners. Little Trees Air Fresheners have been an industry leader for over 25 years for a reason.

With over 20 scents to choose from that last for what seems like forever, you weed’s smell will definitely have a challenge on its hands. 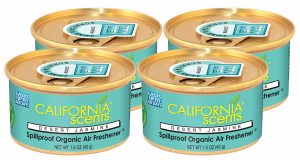 Simply peel off the cover before setting a couple of them under your seats. No one will know they are there and will be complimenting you on how nice your car smells.

When air fresheners aren’t enough, it’s time to add an air neutralizer. Instead of covering up the smell, air neutralizers will capture the odor so it’s no longer a worry. 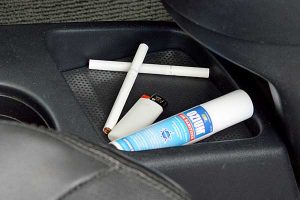 Advertised as an “air sanitizer” Ozium is available as a spray or gel. If you’re going to only use only one thing to get rid of weed smell in your car, I would recommend using this. It not only neutralizes the odor in the air but you can spray your seats and floors to completely eliminate all of the smell.

When I started smoking weed, all my friend’s told me to get some Ozium and for good reason. I know use it religiously and I’ve never been let down. With 4.5/5 stars on Amazon, you definitely can’t go wrong with Ozium. 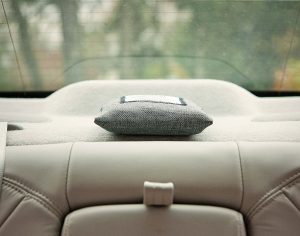 Charcoal bags are a great way to passively soak up all the smell. By using activated carbon that’s usually harvested from coconuts or bamboo, you end up with a fragrance-free, chemical free and non-toxic way to effectively absorb and remove odors, allergens, and harmful pollutants.

This Moso natural air purifying bag is perfect for using in your car. It lasts up to two years and to rejuvenate it, simply stick it outside in the sun once a month for about an hour. 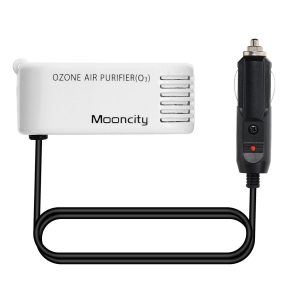 For strong weed smells, ozone generators are the best option. Small ones aren’t very expensive and are pretty easy to use. All you need to do is leave it plugged in and in your car for at least an hour. If your car was really smelly, it could take up to 12 hours.

The ozone generator works by releasing ozone gas which reacts with the odor-causing molecules in your car and breaks them down. This is the standard method used by professional car detailers.

When using an ozone generator, it’s best not be in the car. The EPA states on their website, “When inhaled, ozone can damage the lungs. Relatively low amounts of ozone can cause chest pain, coughing, shortness of breath and, throat irritation. It may also worsen chronic respiratory diseases such as asthma as well as compromise the ability of the body to fight respiratory infections.”

If you’ve been smoking in your car for awhile, the smell has probably seeped into your car’s fabric. The best way to get the smell out of the fabric may be to use an odor neutralizing powder. 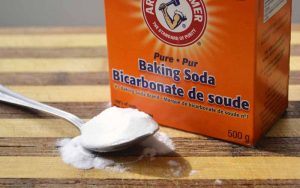 Baking soda has many uses, one of which is removing the weed smell in your car. The best way to remove the smell is to sprinkle the baking soda everywhere in your car, rub it in, then let it sit for as long as possible before vacuuming it all up. If you don’t have the opportunity to let it sit, you can also get the fridge packs and place them around your car.

Baking soda works to remove odors because it’s an amphoteric substance, which means it can act as both an acid and a base. Many odor-causing compounds react with it to form a less volatile salt, which removes the odor. There’s also an adsorption effect, where small molecules diffuse into the porous solid and have difficulty diffusing out. 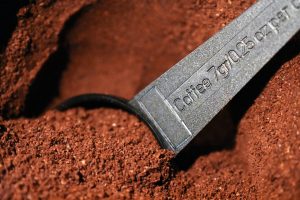 Coffee is quite aromatic, and its aroma can save you. To be sure, this can be a messy solution, but it is highly effective. Loosen your pockets to get some strong, expensive, and great-smelling coffee.

Don’t grind it very fine and sprinkle it everywhere the car. Let the coffee do its magic for at least a day before vacuuming it up. Now your car will smell like coffee for weeks to come without any lingering weed smell. 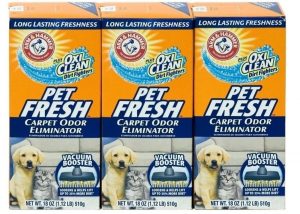 In my opinion. pet odor removers are the best powder odor neutralizer you can get. Designed to remove the smell of animal urine and feces, they’ll definitely remove the weed smell from your car.

This one includes both baking soda and Oxi Clean for the best results. Just make sure to vacuum it up really good as some of these products may include chemicals that are harmful but it should be limited as they’re made with pets in mind.